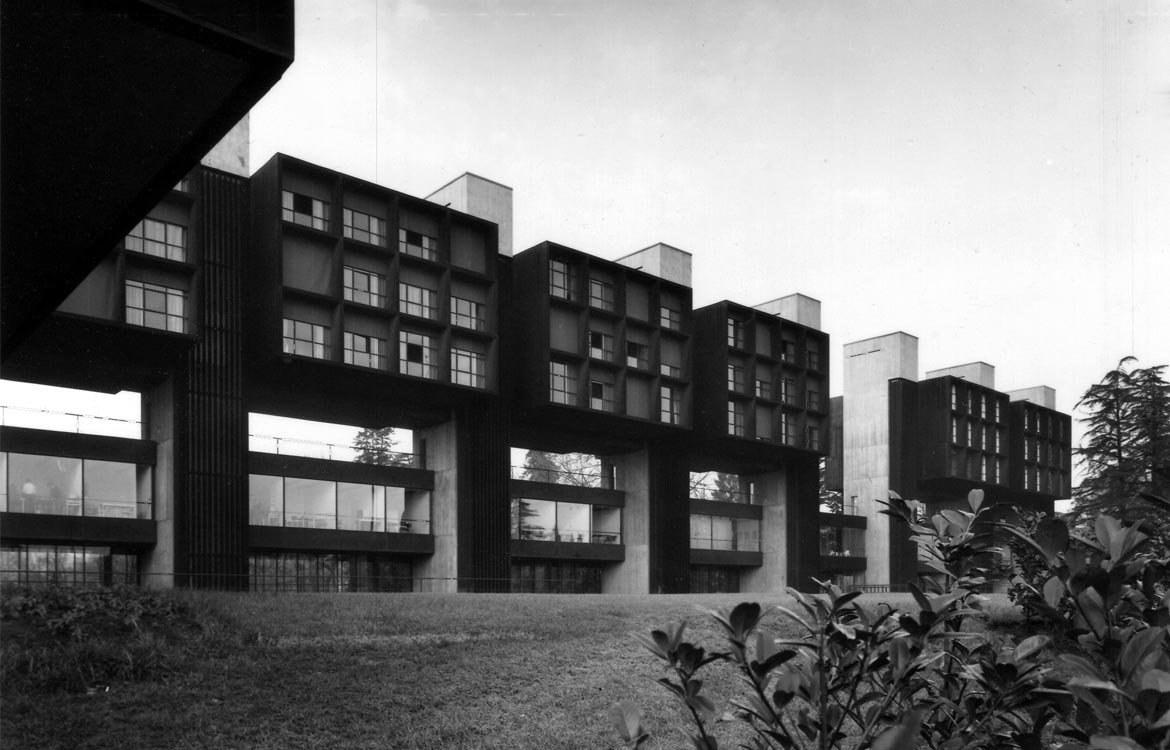 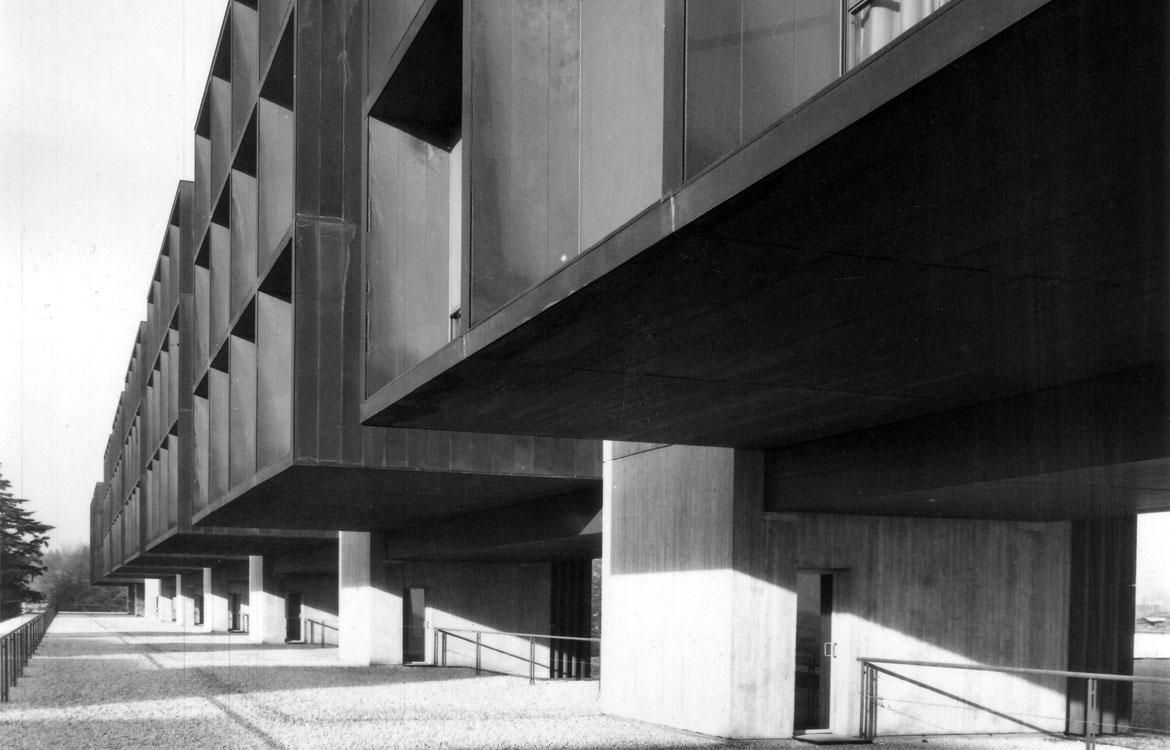 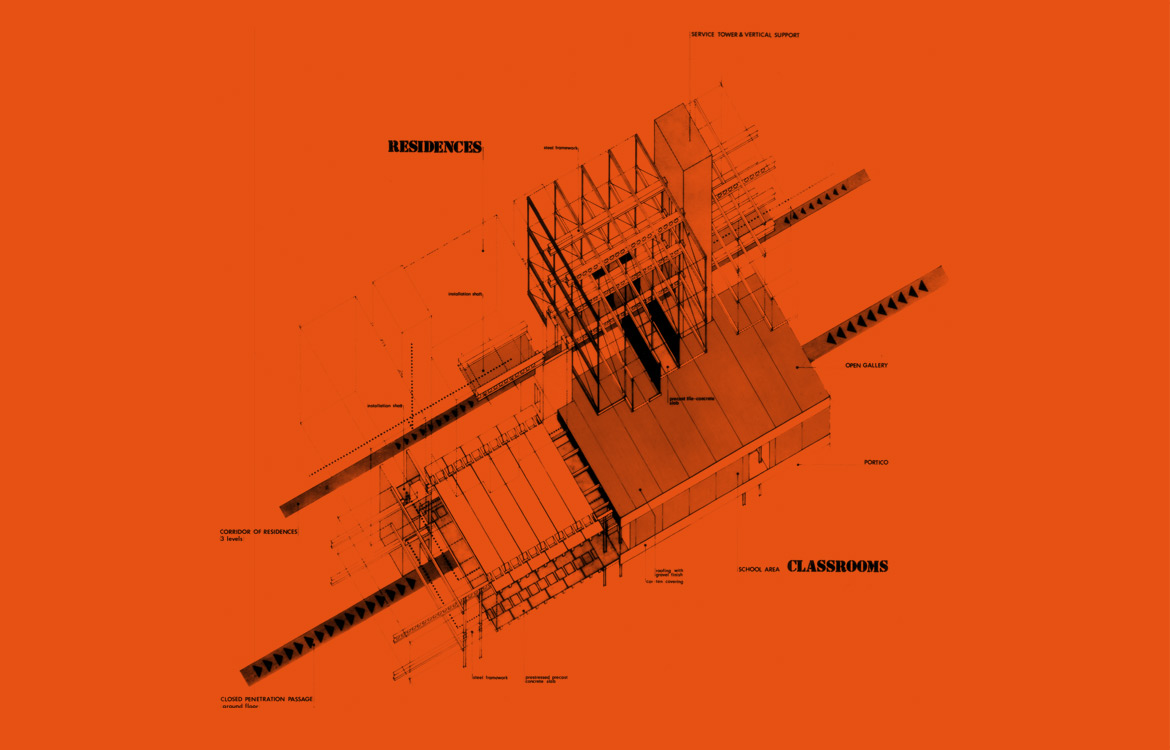 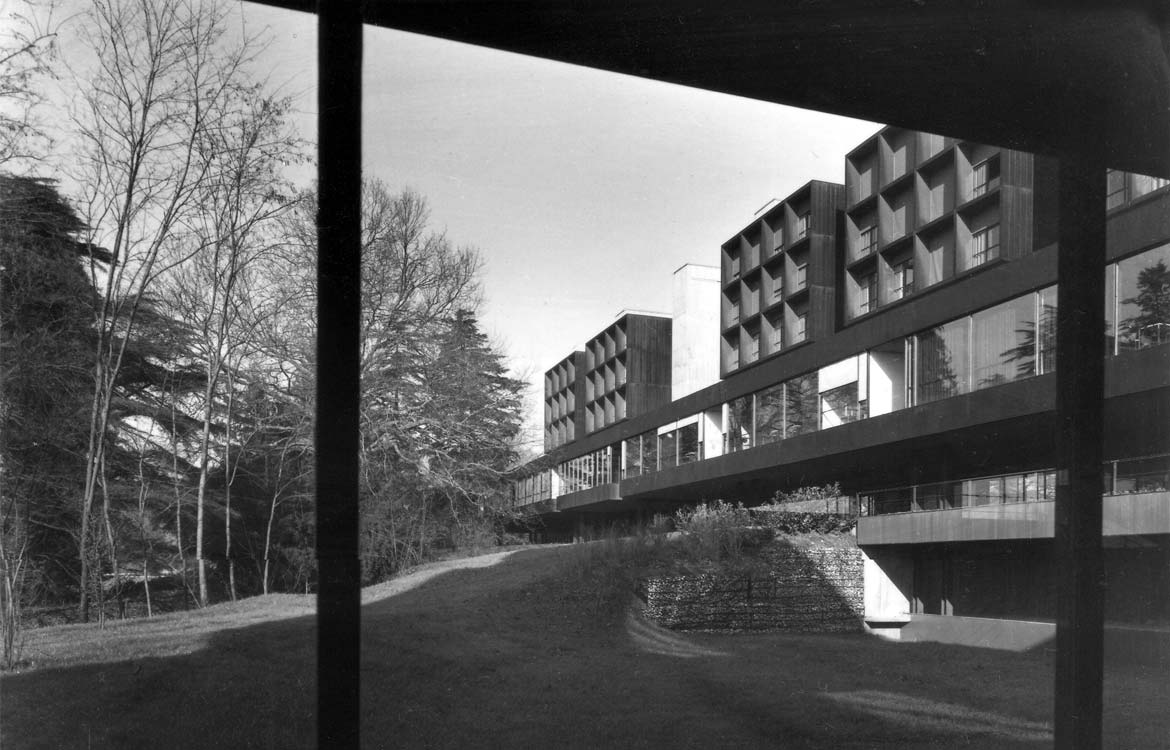 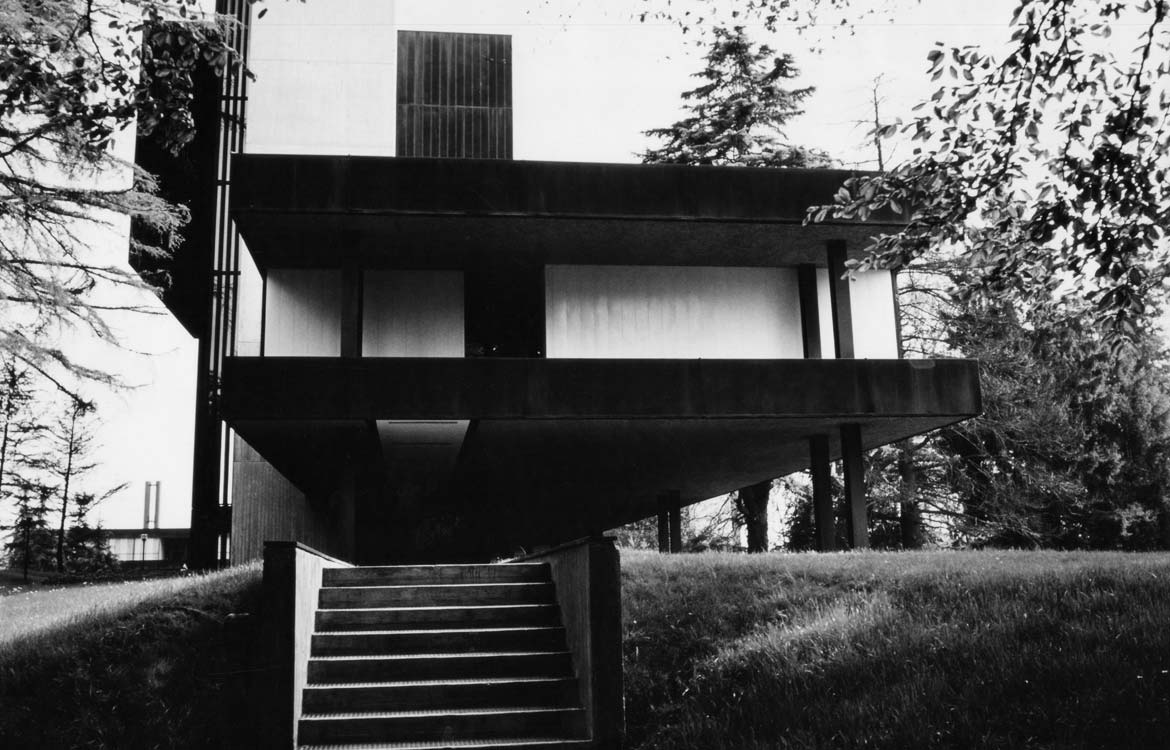 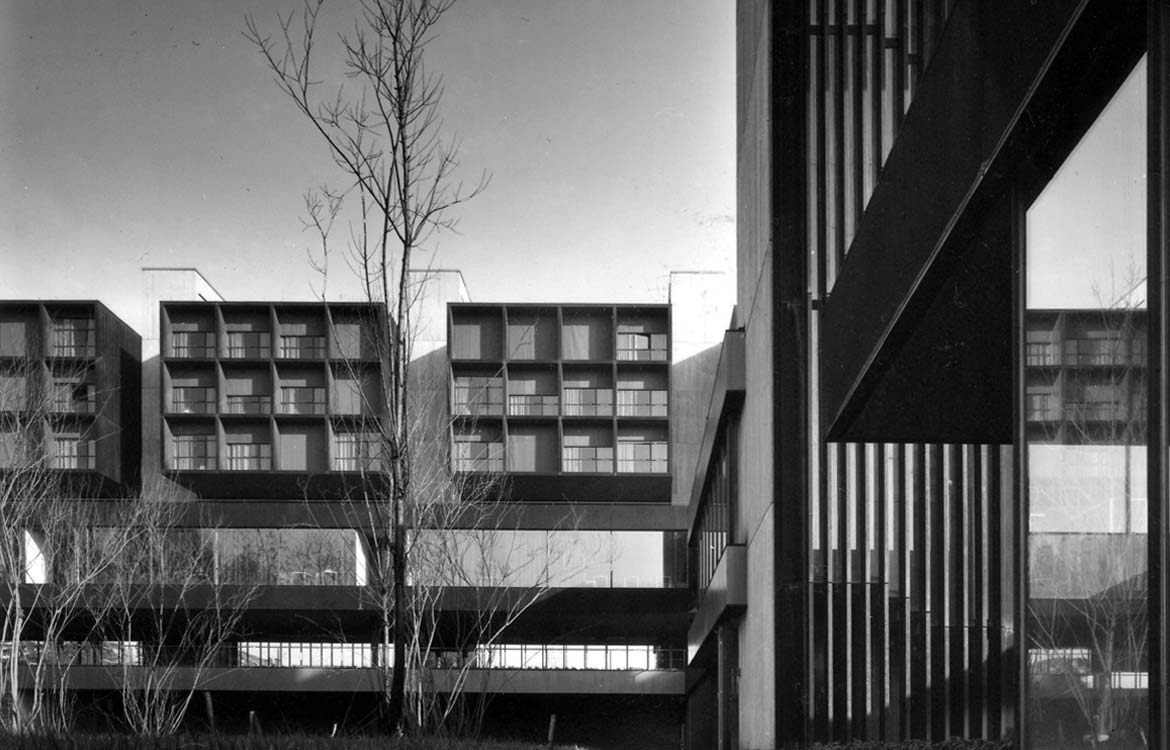 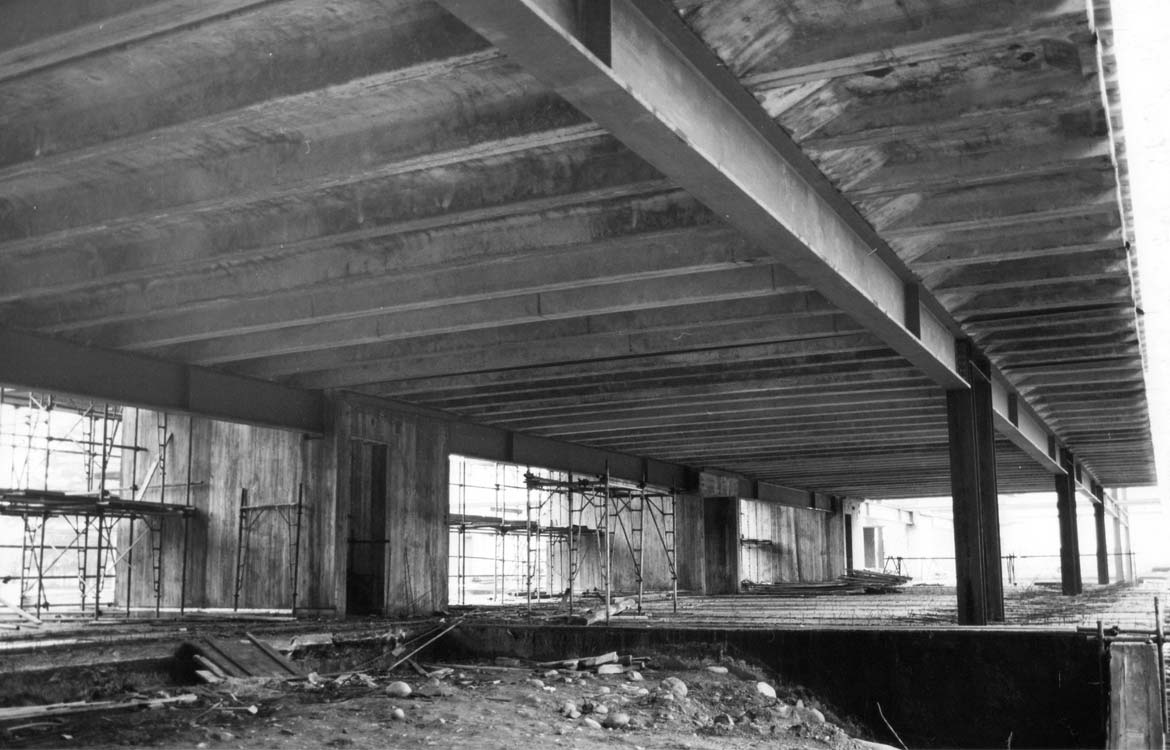 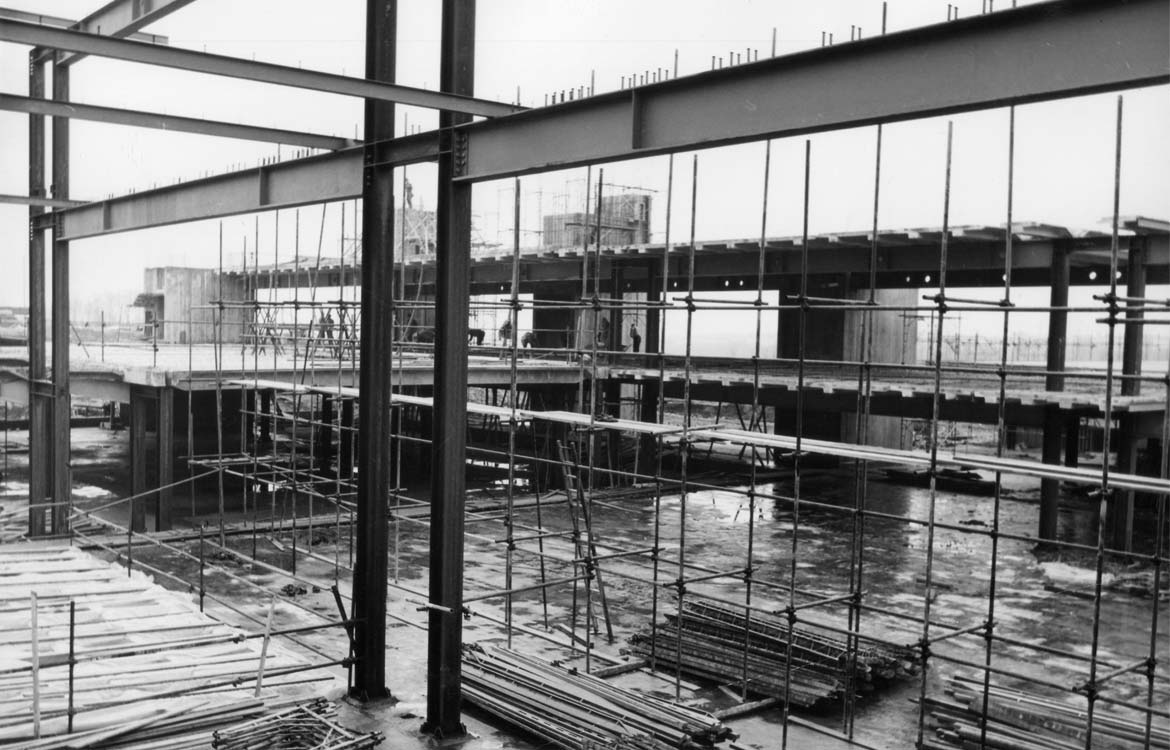 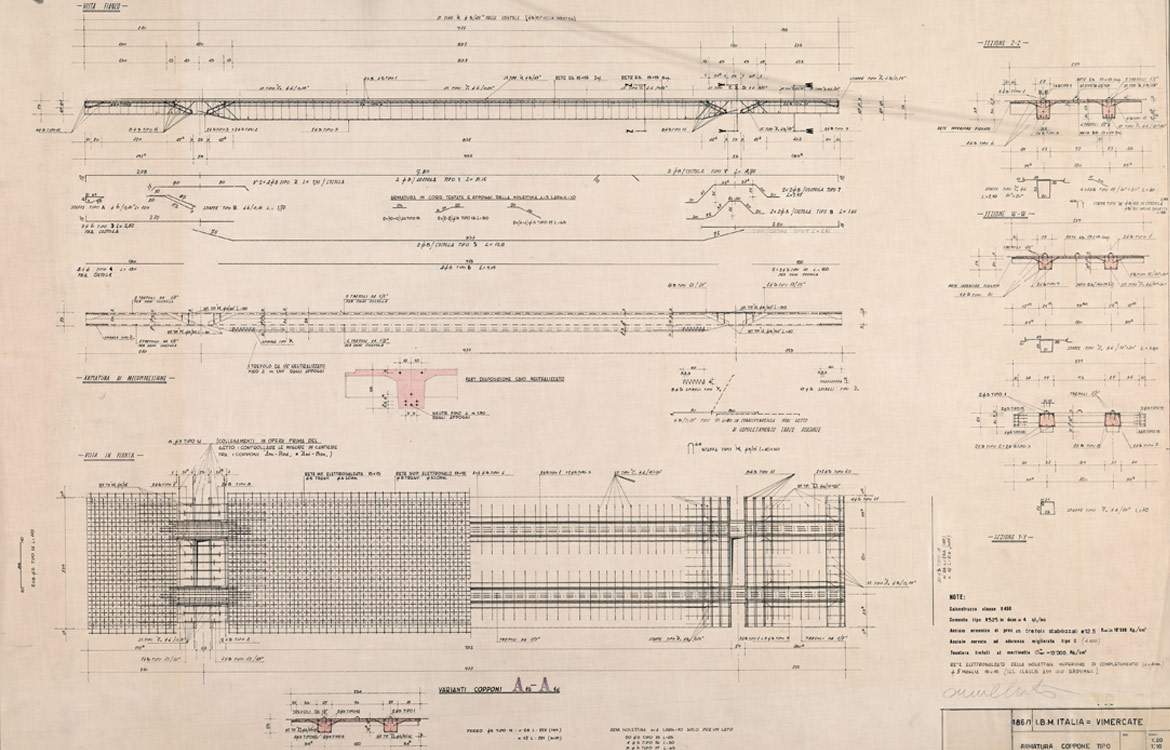 «…Based on the information provided by the client regarding the areas of residential and training functions, it has been possible to develop a modular grouping of lodgings in close relation with the groupings of training spaces. The result is a basic unit that generates and sizes the entire complex. It is composed of two modular residential units of 24 single rooms each, organized on three levels, with an elevator shaft at the center and two stairwells with physical plant elements at the sides. The corresponding training section below, on one level, is subdivided into classrooms, and can accommodate the same number of students lodged in the residential unit above, along with the foreseen number of “external” students. The basic unit, on ground level and in the basement, has horizontal circulation routes as well as a free outdoor area for recreation and walking, placed as a buffer between the stacked didactic and residential functions. The standard unit thus identified continues along the main axis of development of the complex to form two volumes of educational-residential units, the second of which (downhill) is staggered by one floor with respect to the first, and is presently interrupted at one third of its total planned size. The system of proceeding in basic units permits gradual development of the complex while maintaining the relationship between educational, residential and service functions.
…The educational-residential functions intersect the group of collective functions at the center, clustered around the connecting courtyard. Uphill from the courtyard a two-story volume is located, with the reception hall and the offices of the managerial and training staff; downhill one finds the lounge, the dining hall and the kitchen. On the south side of the courtyard, the semi-basement contains the data processing center and teaching workshops, under a lawn-covered roof. The same planted roof is planned, in the future, for the opposite side, which will host a two-story auditorium and a gymnasium.
…Below the courtyard, in a central position with respect to the maximum planned expansion, there is a zone for general services with an independent access drive to the physical plant systems, storerooms, kitchen and underground service corridors. External and internal pedestrian circulation is organized with a clear system of horizontal walkways, partially glazed and partially covered, met by the vertical accessways of the elevators and staircases contained in the vertical structural elements in reinforced concrete. The horizontal routes extend outside in a seamless way in terms of the material, connecting the building to the ground and to the equipped outdoor zones (sports area, park, etc.). The layout of the building thus happens in a fluid, continuous way, permitting different choices of routes to avoid points of congestion.

Structural criteria
The towers in reinforced concrete for the vertical circulation elements and physical plant are used as the only load-bearing parts of the residential blocks. Their lateral walls are met by iron beams, with a span of 12.4 m. These orthogonally support a system frames braced and stiffened by parts in reinforced concrete that define the spaces of each individual room. The volume of the classrooms, off axis with respect to the tower, is also supported by a corresponding series of double H columns that support the longitudinal framework. The slabs are composed of prestressed prefabricated reinforced concrete segments that collaborate with the iron beams by means of a supplementary pour. The structure of the plates is in iron with a crossed framework of square slab elements in prefabricated reinforced concrete.» From “Domus”, 532.
«…The international jury of the European Convention for Structural Steelwork has assigned the C.F.C.M. Prize 1975 for the above construction to Italy. The Convention states: “A fine example of the advantages of metal structures shaped in combination with reinforced concrete, extending to a wide field of application.” These are towers in reinforced concrete for vertical access, separated by 12.4 m and used as load-bearing members for the horizontal structures. The vertical walls are met by pairs of steel beams that orthogonally support a particular slab segment in ordinary reinforced concrete (drawing attached) with measurements of 19.2 x 18.22 meters. A concrete pour completes the connection of the segments with the steel beams. The idea of the “coppone” came to me when I was looking at a particular type of railroad tie.»