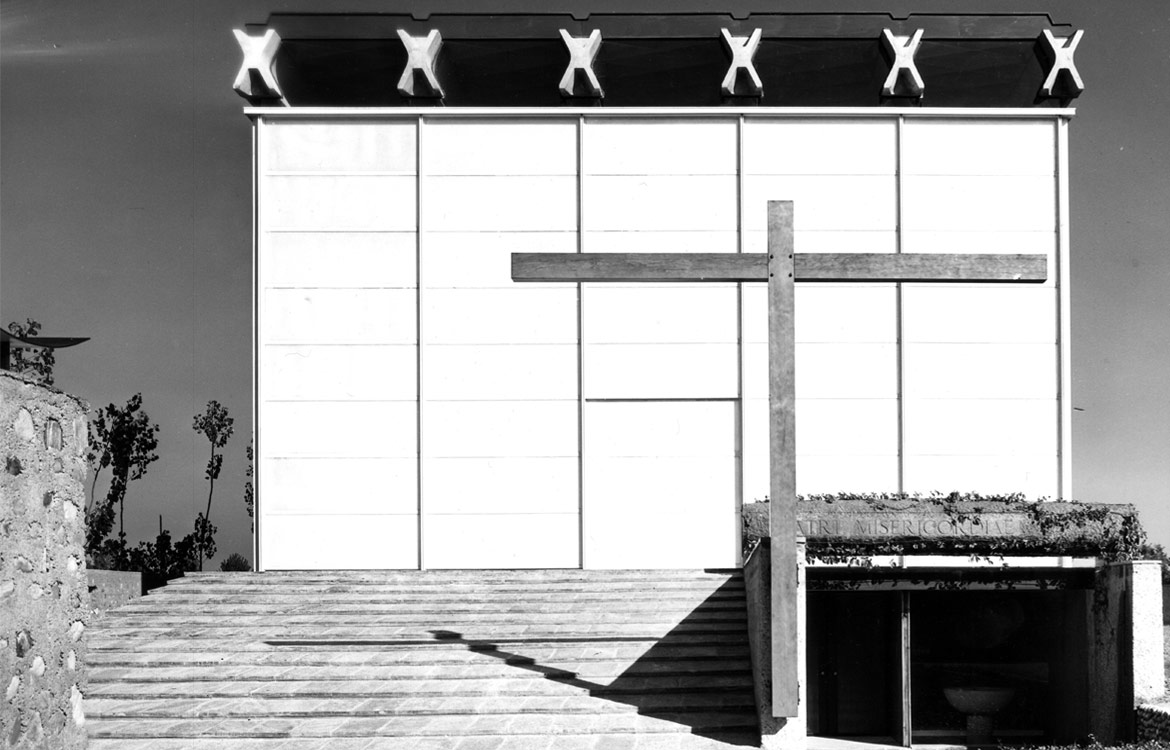 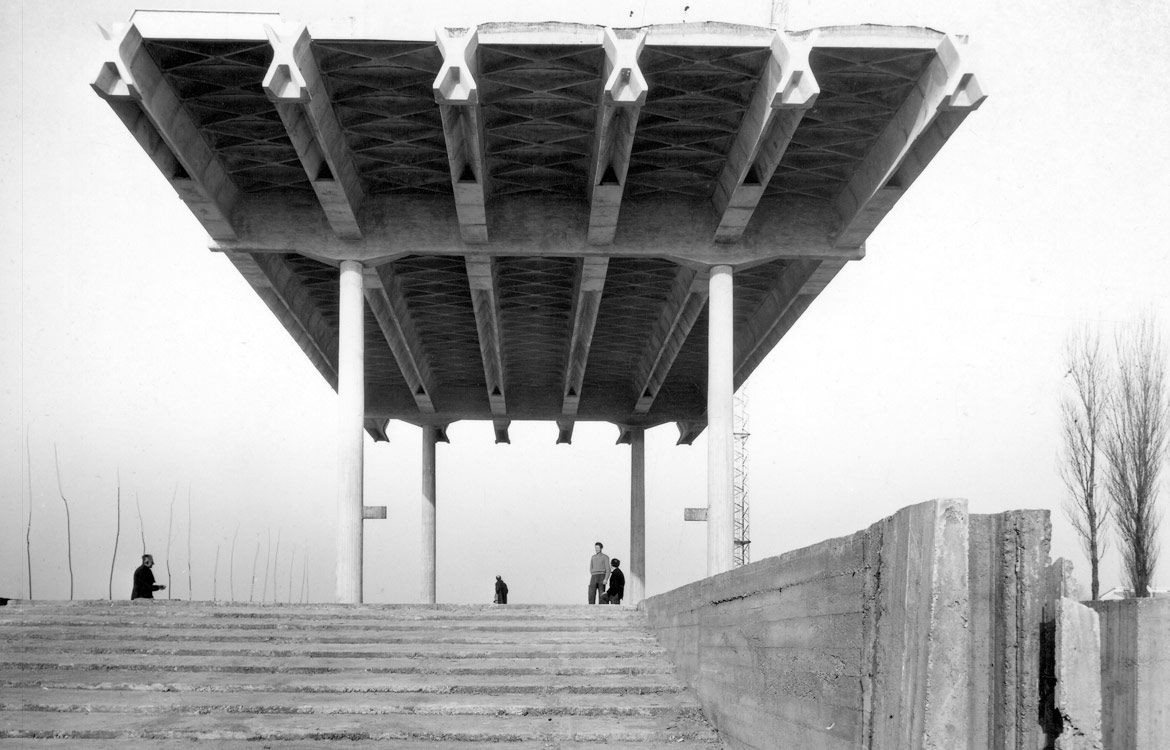 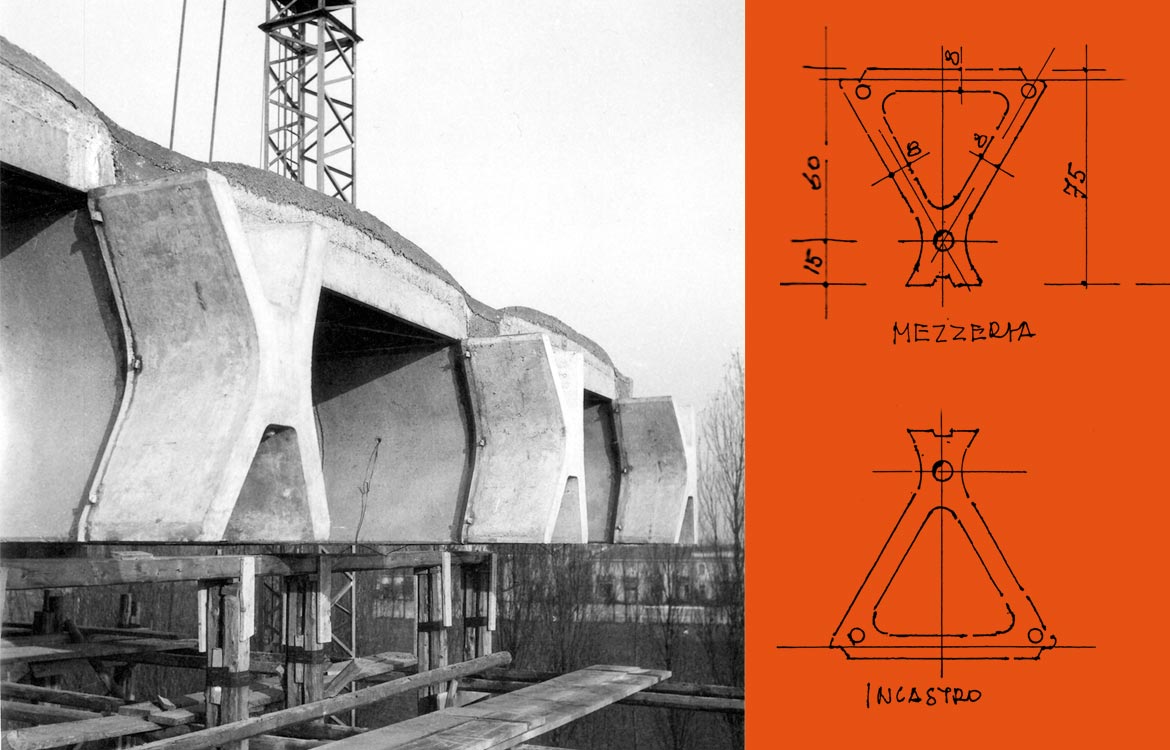 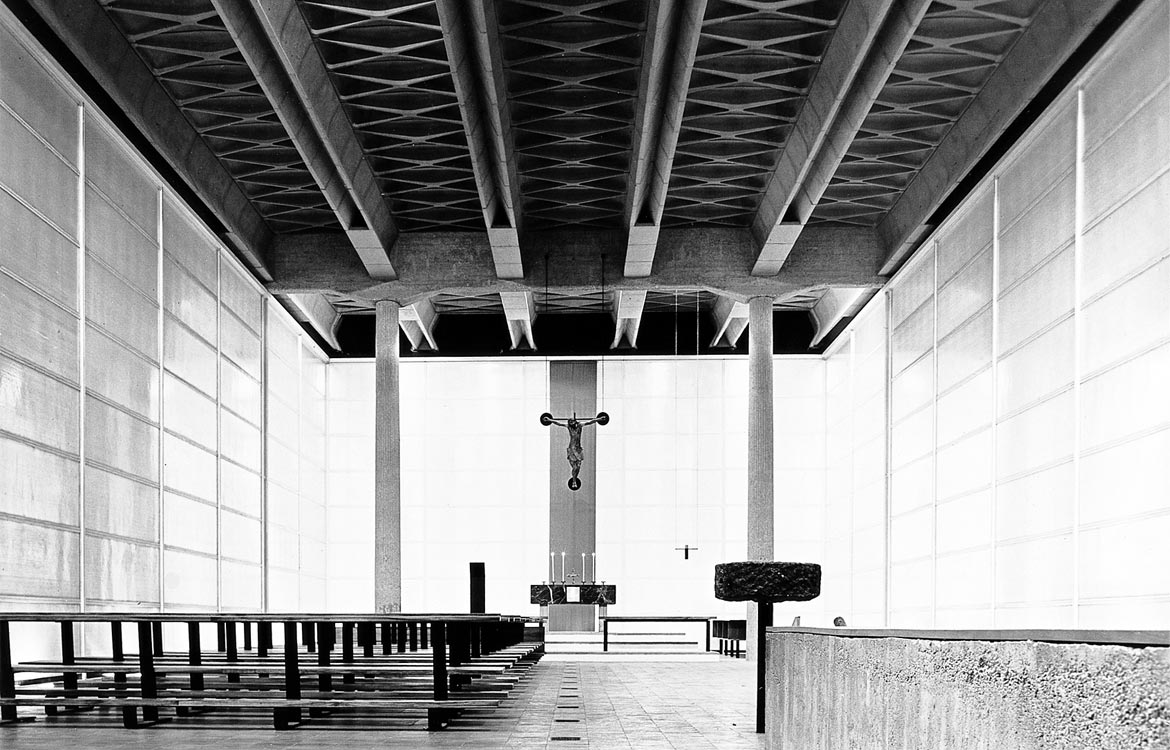 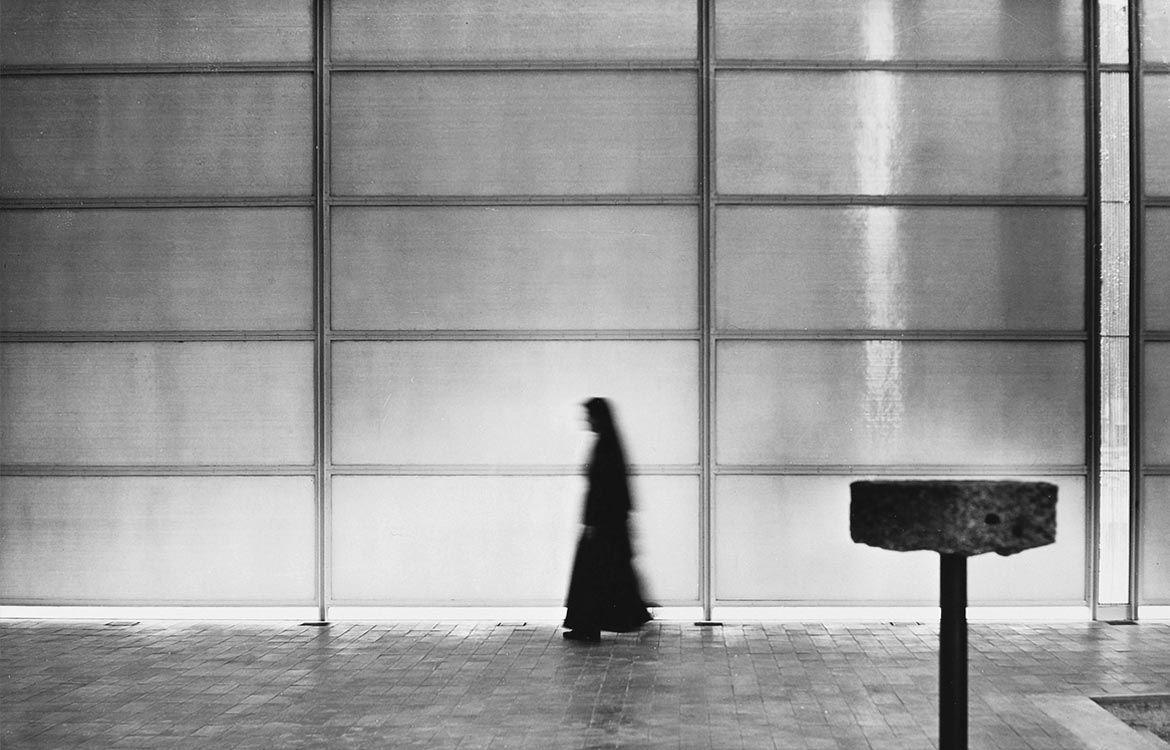 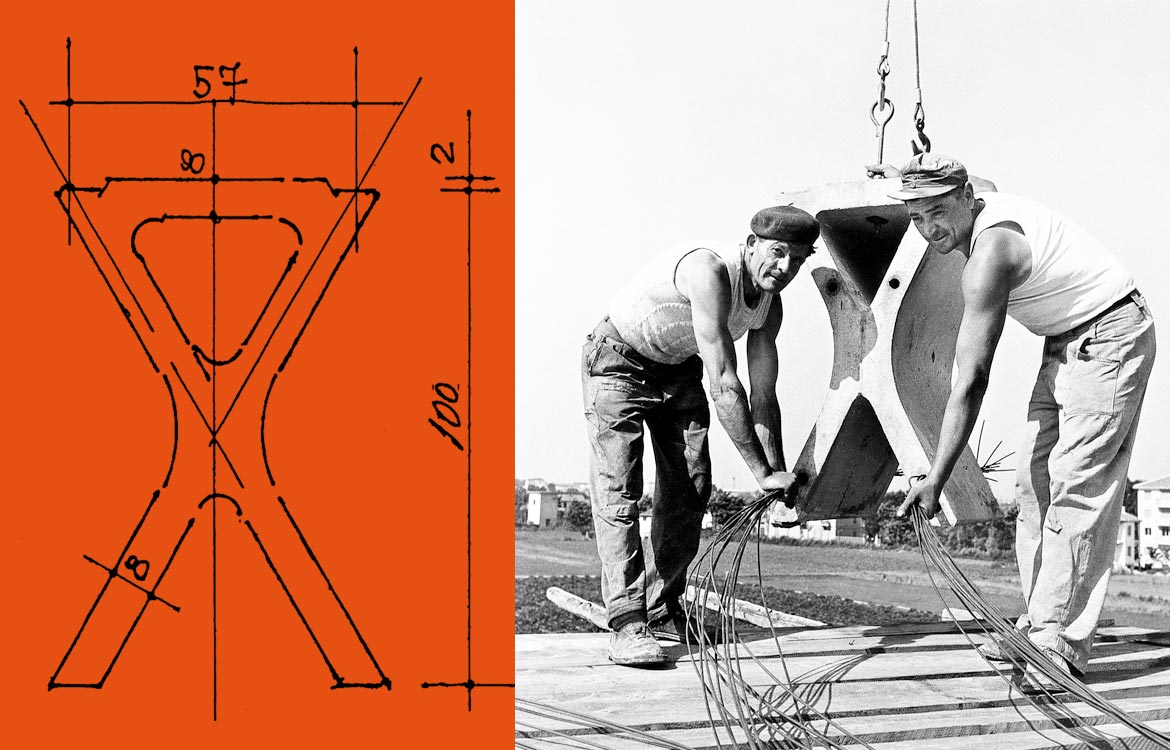 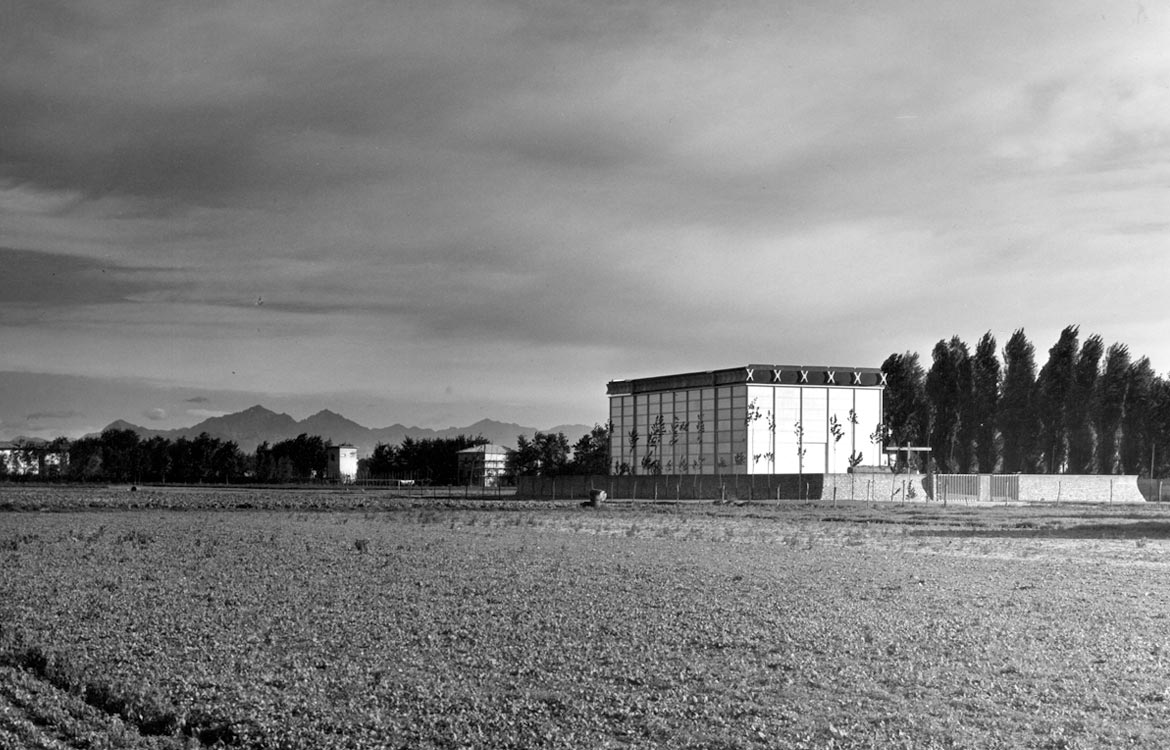 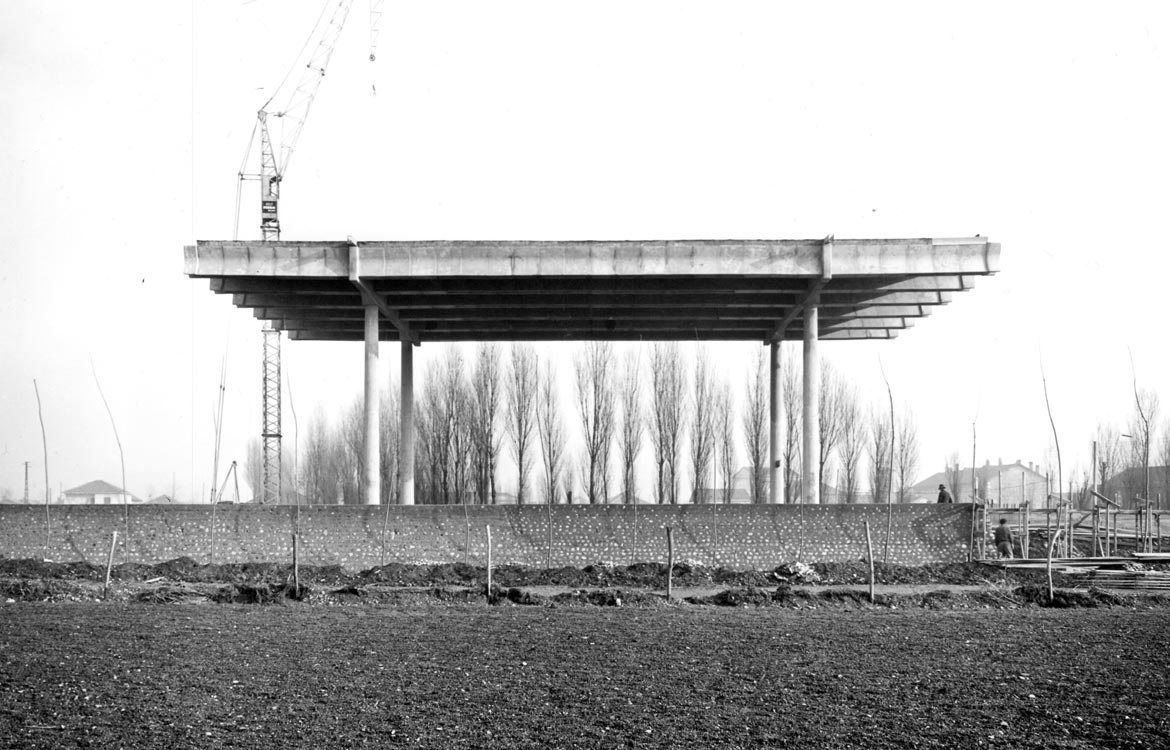 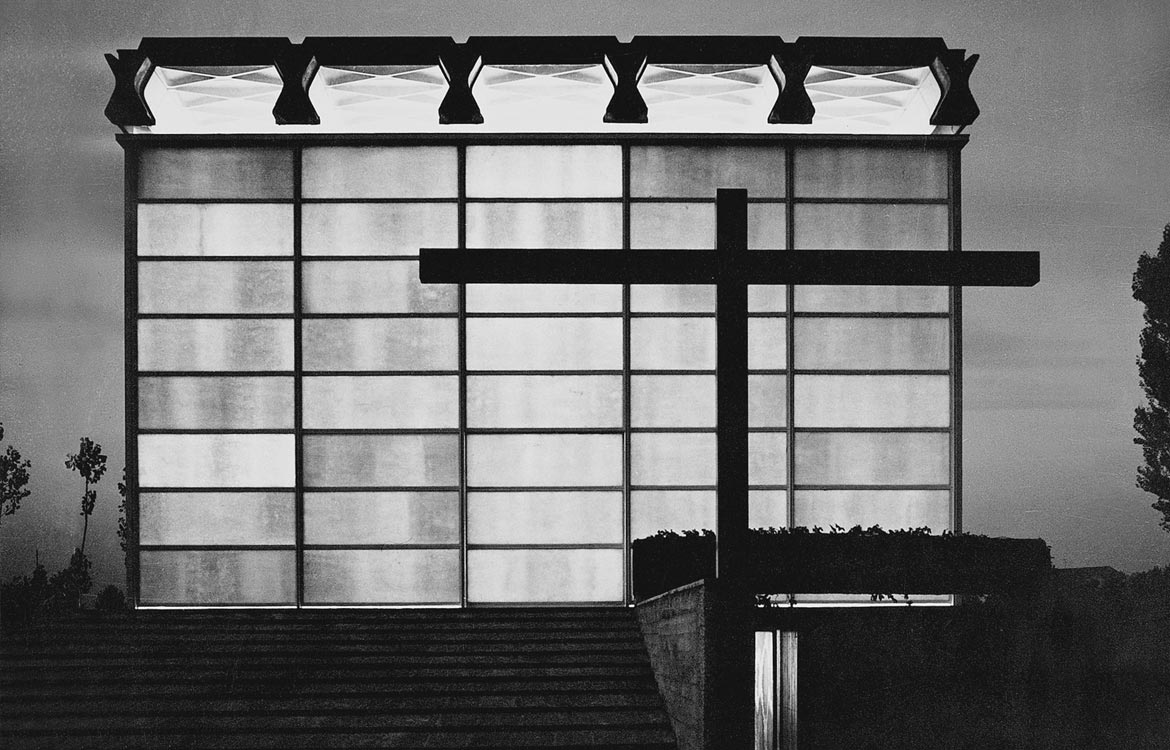 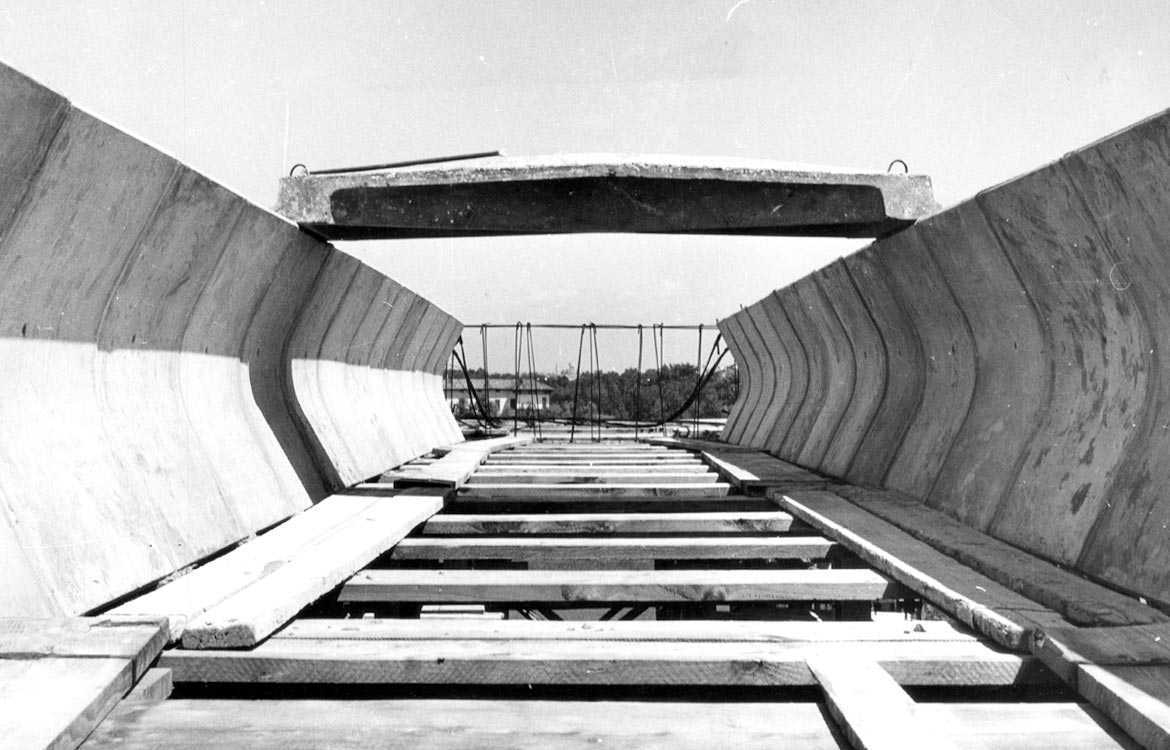 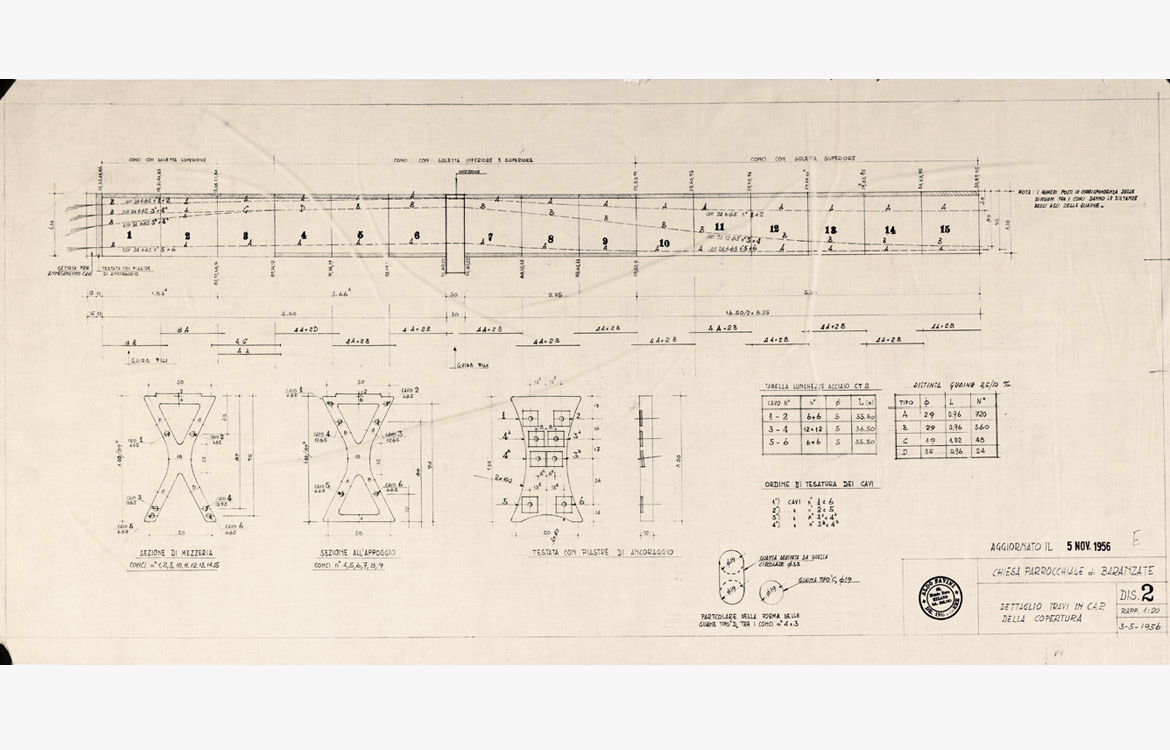 «…The cella presents itself as a solid measuring 28 x 14 meters, with a height of 10 m, entirely clad in glass panels made translucent by a sheet of polystyrene contained inside them. In the daytime this surface generates a general glow of light in the interior, crossing the white insulating material. In the evening, from the outside, the volume of the church hall is transformed into an opalescent lamp that lights the surrounding area. The flat roof crowns the facades of the volume, displaying its structural arrangement on the various sides. Inside, the roof is supported by four tapered columns, 8 meters in height, that bear the two main beams and the six secondary beams facing the entrance in a crosswise arrangement. The skeleton of each is formed by 30 concrete blocks with a reversible X form, joined and prestressed on site. The space is covered by 180 flat prefabricated panels, 36 per span.»

«…From the architect B. Morassutti, I received the commission to design a prefabricated structure that had to be repetitive, whose parts had to be made in a prefabrication center and then distributed to small companies for the construction of various works in other zones. The work, financed by a private donor, a relative of Arch. Morassutti, had to have a rectangular plan and extend over an area of about 15 x 30 meters. My first instinct was to place the pillars at the extremities A,B,C,D, the main beams A-B, C-D and the secondary beams on the longer sides.
The section envisioned, however, in my view, had a series of shortcomings: the elasticity of the roof created moments of flexing on the pillars, and the weight and size of the precast parts (1300 t/ml) were remarkable, and did not lend themselves to handling on the part of small construction firms. Something more manageable had to be developed. The solution was to shift the pillars towards the center, significantly reducing the external characteristics of the strain, and not creating moments of inflection of the vertical structures.
So there was a need for a structure whose prestressing cables would reach the extremities of the roof, to perform the external tensioning with the Favini system.
Therefore a central span and two outer overhangs whose maximum bending moments, though of an opposite sign, would be equal in absolute value. The result was the technical architectural solution of the triangular beam reversed at the midpoint and the interlock. The combination of the two sections led to the final solution.
That was the technical-mathematical justification, but actually the structural idea is different. After the first attempt with a secondary beam covering a span of 30 m, later abandoned, I took some time to think, due to my commitments with Impresa Tamburini in Milan. To furnish my own home, I designed a small desk that still exists in my studio on Viale Filippetti, where the vertical supports were composed of two X structures with the posts inclined by 60°. The horizontal element on which the feet rested was also an X structure. Every time I entered the house I would stop and look at that desk: it was the source of the structure of the roof in Baranzate, as well as the beams and the roof tiles.
For consistency, the main beams of 0.3 x 1.3 meters also rest on pillars with the same principle as the secondary beams, namely with the equality of the bending moments at the midpoint and at the supports.»