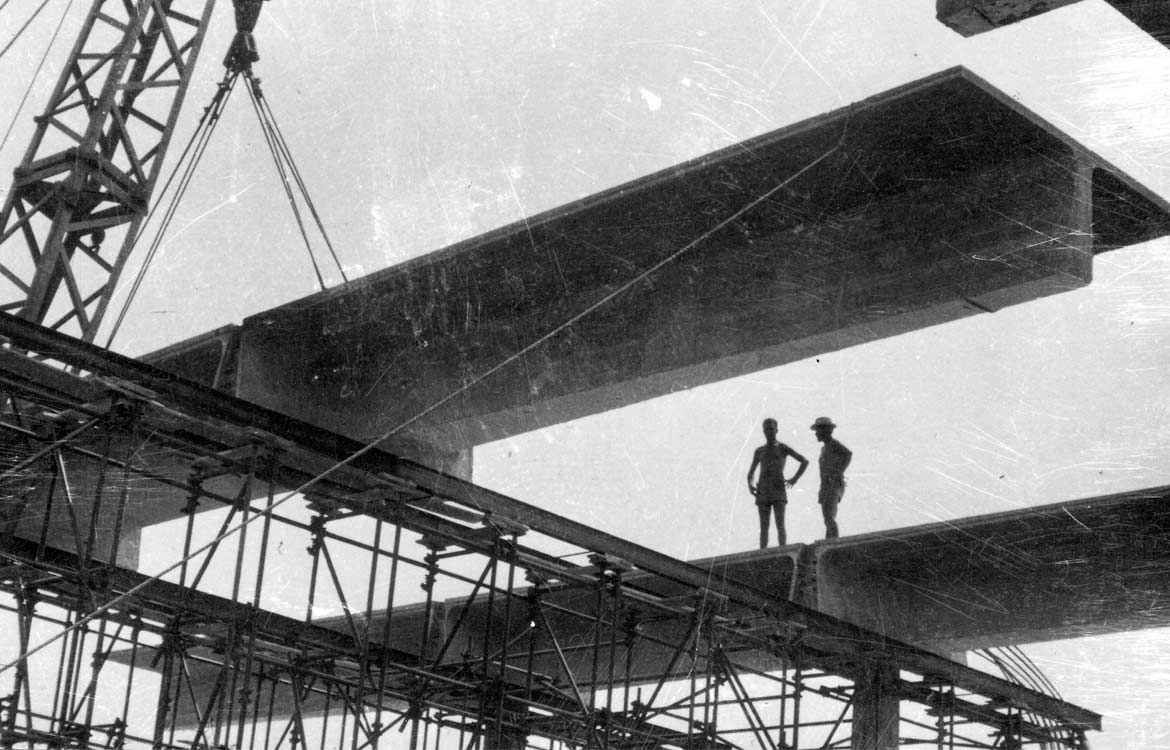 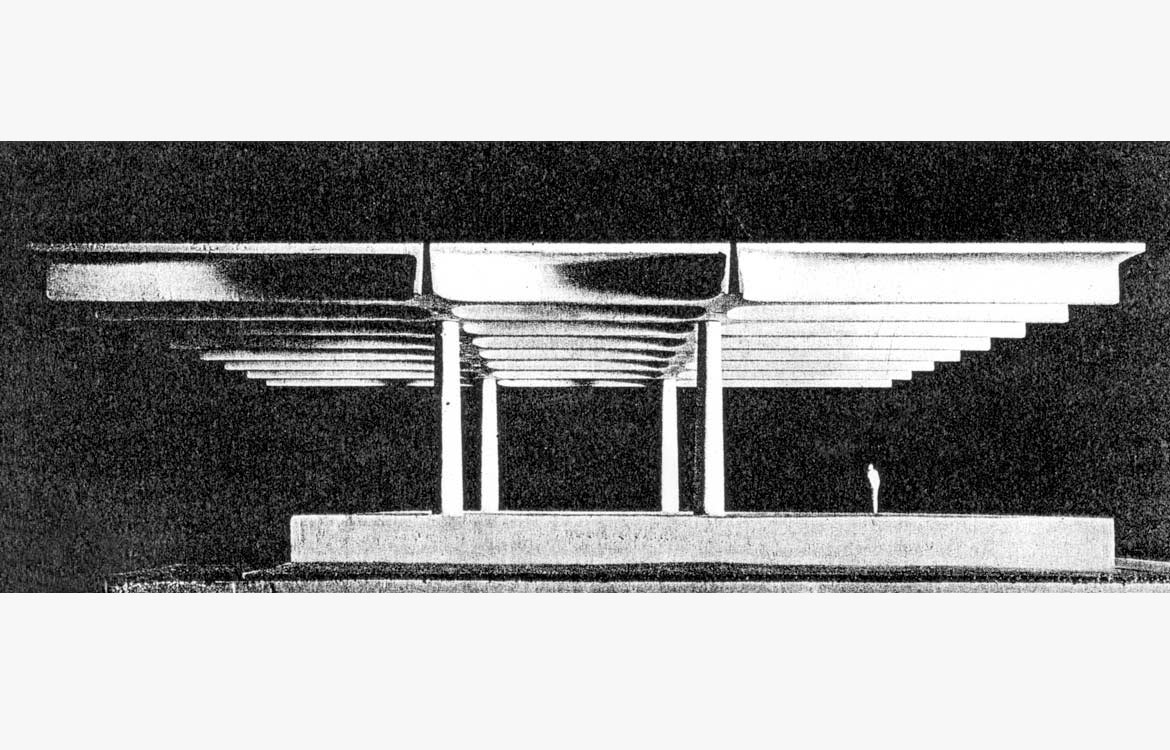 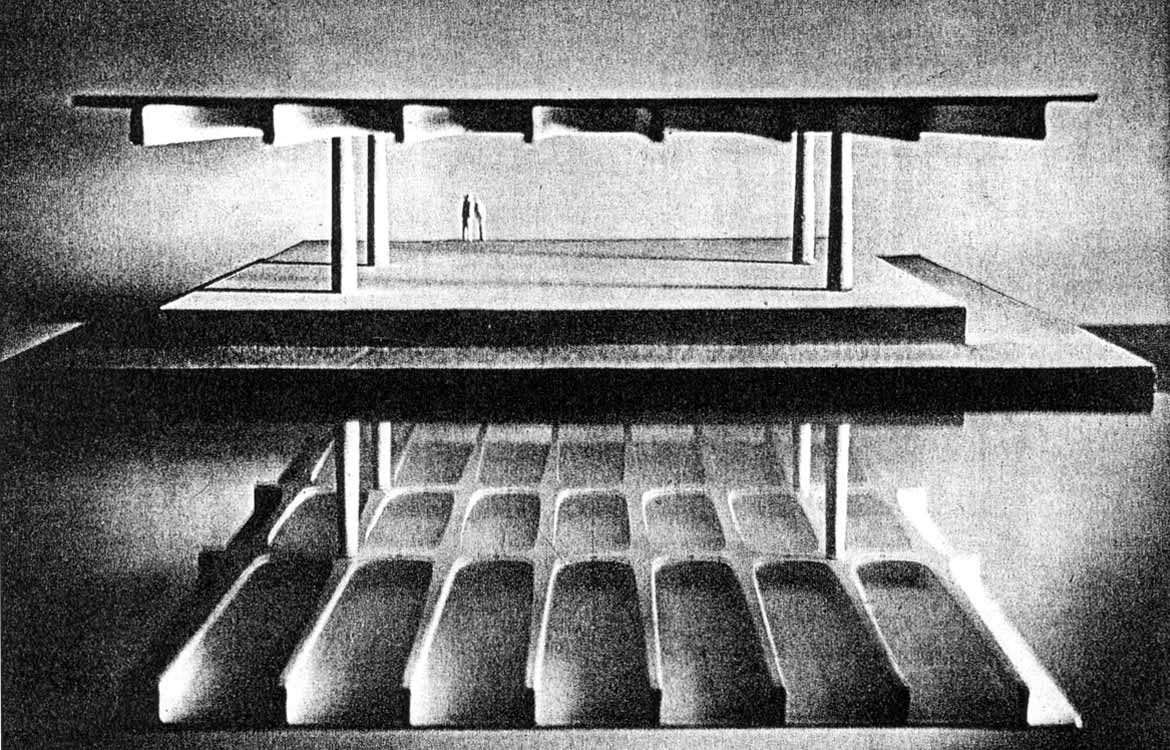 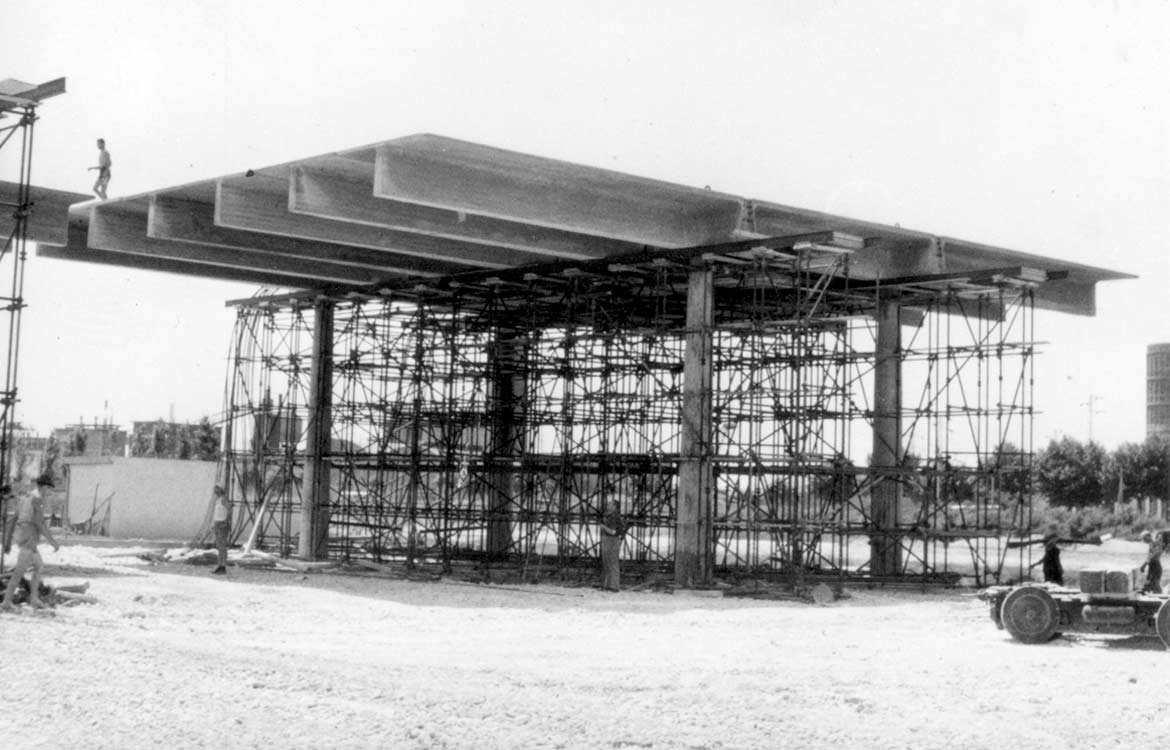 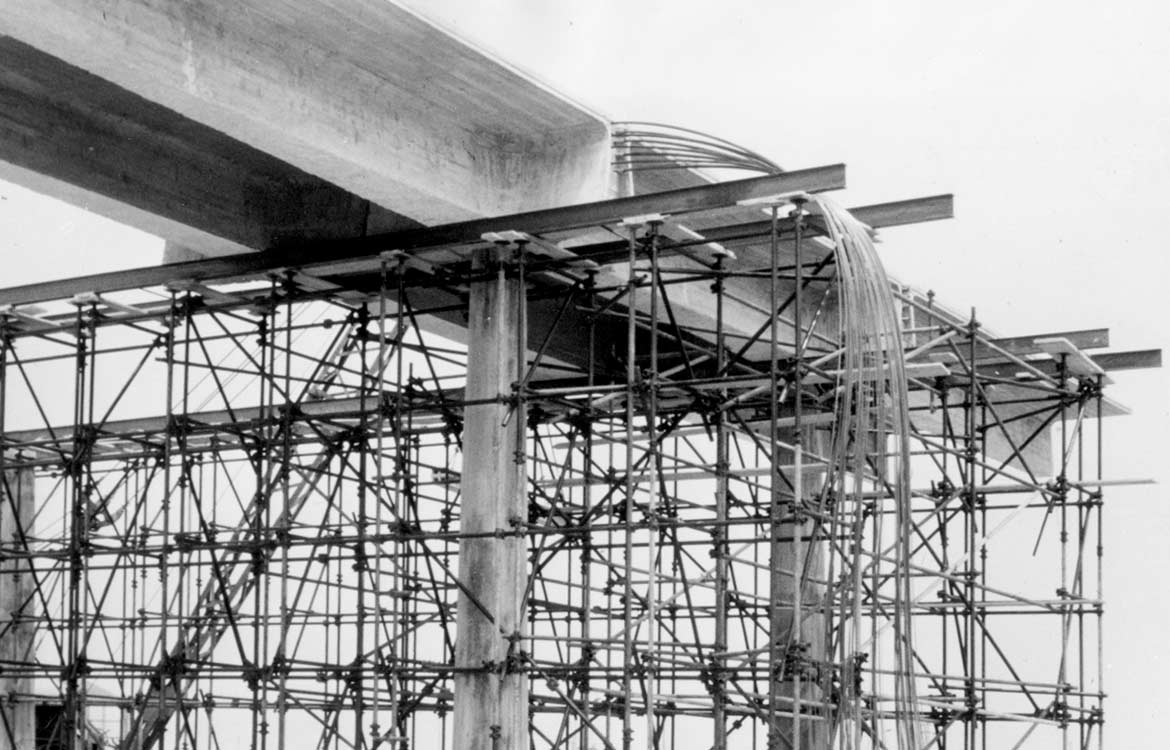 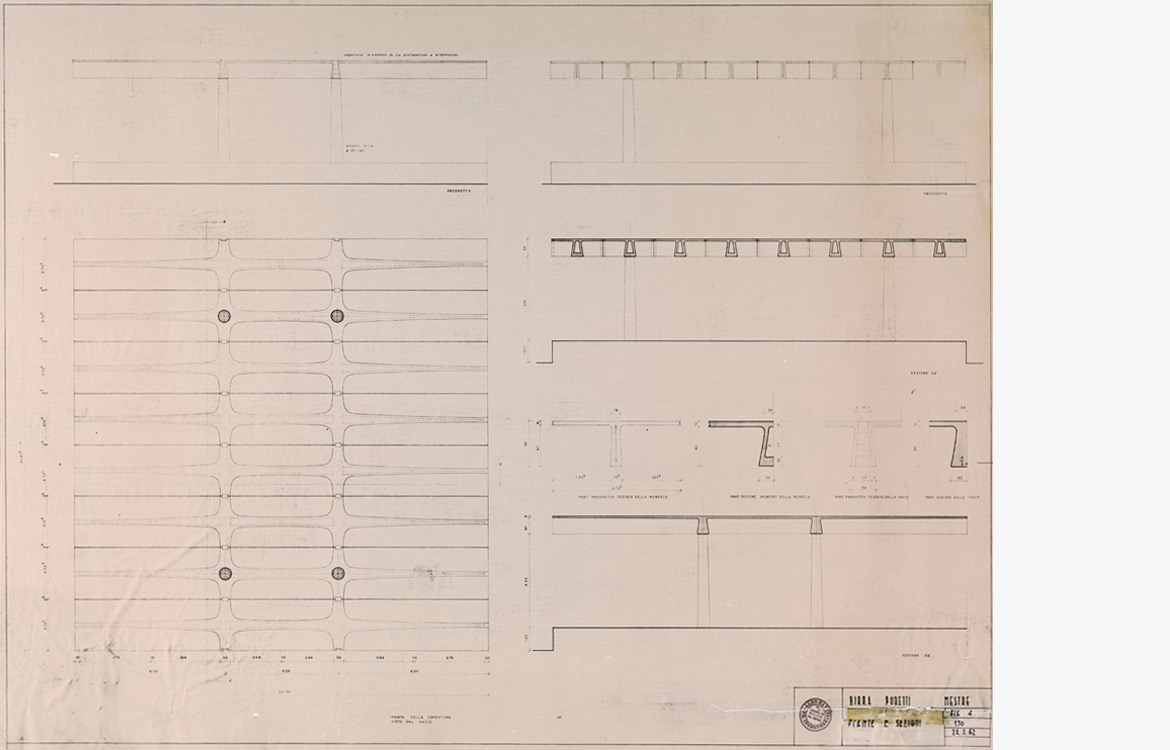 «…The roof slab rests on four hollow truncated conical columns with a diameter varying from 50 to 70 cm. One pair of pillars is integral to the structure thanks to steel drainpipes with a diameter of 10 cm, while the other pair is made completely independent of the roof by means of neoprene rubber supports. Therefore the structure, in static terms, is simply a beam resting on pillars, with an internal span of 13.75 m and two overhangs of 4.12 m each. The precast parts of the roof are installed on a temporary framework built on the two alignments of the pillars. Then the prestressing cables are inserted in their compartments and the roofing parts are sealed with cement mortar along the contact with the roofing strips and the joints corresponding to the to the main beams. Then comes the operation of the simultaneously tensioning of the two main beams, followed by injection of the cables and stripping.»

«…A few years after the project of the structures of the church of Baranzate, Arch. Angelo Mangiarotti asked me to design a structure for the industrial building in question on an area of 22 x 22 meters, which was then built from May to July 1962 and presented at the 5th International Congress on Prestressed Concrete in Paris that same year.
Thinking back on the church of Baranzate, I realized I had designed a classical type of structure, nothing new, that is. Exactly four pillars, two main beams, five secondary beams and tiles to complete it… So I set myself the problem of developing a single basic element that would include the main beam, the secondary beams and the roofing tile. After a range of solutions, I selected the breaking of the main beam into blocks with a length of 2.725 m + 2.5 cm = 2.75 m. The gap of 2.5 cm served to seal and complete the roof slab. This slab, with a thickness of 8/12 cm, had a groove at its center to contain the sealing pour… The secondary beam with two overhangs of 8 meters and an interval between the pillars of 4 meters was intentionally designed in ordinary reinforced concrete because the prestressing cables with their sheaths would have created problems at the intersection between those of the secondary beam and those of the main beam, perpendicular to them. The secondary beams in reinforced concrete, 16 in number, had all the time needed for an initial seasoning (about 30 days). The overhang of the secondary beam was designed intentionally high (8 meters) with respect to the central span because we wanted a negative moment for the whole length of the precast member, to bring the mild reinforcement into the upper part of the beam itself. The particular trapezoidal form of the core of the cross-section of the beam is a static necessity more than an architectural desire, because the compressive stresses are only in the lower part for the whole length of the beam and increase significantly with the increment of the overhang (squared). Naturally the enlargement, maintaining the hollow section, had to do only with the lower crosspiece. The T-section is composed of a flange with a thickness varying from 8 to 12 cm… The design of the main beam was done with particular care, because it was the load-bearing member of the entire structure. Unlike what was done in the secondary beams of the church at Baranzate, the position of the pillars is such that the positive bending moment is almost double that of the negative one, in order to bring the prestressing cables into the lower part of the beam itself as much as possible, to they do not intersect with the upper cables of the secondary beam. At the end, particular care went into the joints of the main beam to avoid the stress of vertical creep of the precast parts. The walls of the joints are serrated, in fact, almost as if starting at the supports the tiles were resting one atop the next, through the completion pour. The tensioning of the cables (Favini system) was done simultaneously in the two main beams, so as not to create coplanar torsional strains in the slab…».